Singing workshops followed by concerts for the most distant from cultural practices. 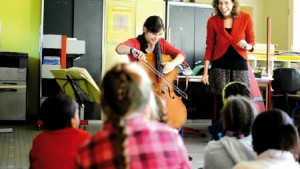 The Concerts de Poche organize meetings between inhabitants of the rural and suburban areas in France, very distant from cultural practices, and famous classical music, jazz and Opera artists. Musical workshops dedicated to creation and musical practice such as “Tous en Scène” allow the isolated or struggling youth to grow used to said “academic music” through becoming protagonists of the cultural life of their area. 15 projects, mainly in rural areas, involve 400 young people in “long term” artistic workshops (writing, choral singing, percussion instruments, …). They create the first part of the concert which they interpret as an opener of a “concert de poche”, accompanied by the artists.

The youth reveal their ability to create in this gratifying project, develop their critical thinking, participate in the acquisition of a common culture, contribute to the occupational integration and fight school failure through improving self-respect and the concentration aptitudes of the youth.