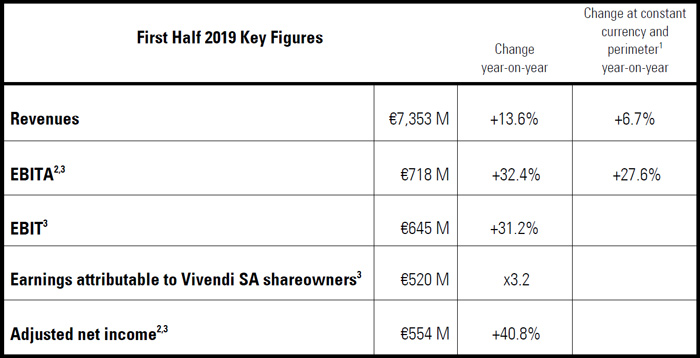 Since 2014, Vivendi has been focused on building a world-class content, media and communications group with European roots. In content creation, Vivendi owns powerful, complementary assets in music (Universal Music Group), movies and series (Canal+ Group), publishing (Editis) and mobile games (Gameloft) which are the most popular forms of entertainment content in the world today. In the distribution market, Vivendi has acquired the Dailymotion platform and repositioned it to create a new digital showcase for its content. The Group has also joined forces with several telecom operators and platforms to maximize the reach of its distribution networks. In communications, through Havas. the Group possesses unique creative expertise in promoting free content and producing short formats, which are increasingly viewed on mobile devices. In addition, through Vivendi Village, the Group explores new forms of business in live entertainment, franchises and ticketing that are complementary to its core activities. Vivendi’s various businesses cohesively work together as an integrated industrial group to create greater value. www.vivendi.com

Cautionary Note Regarding Forward-Looking Statements. This press release contains forward-looking statements with respect Vivendi’s financial condition, results of operations, business, strategy, plans and outlook, including the impact of certain transactions and the payment of dividends and distribution, as well as share repurchases. Although Vivendi believes that such forward-looking statements are based on reasonable assumptions, such statements are not guarantees of future performance. Actual results may differ materially from the forward-looking statements as a result of a number of risks and uncertainties, many of which are outside our control, including, but not limited to, the risks related to antitrust and other regulatory approvals as well as any other approvals which may be required in connection with certain transactions and the risks described in the documents of the Group filed by Vivendi with the Autorité des marchés financiers (the French securities regulator), which are also available in English on Vivendi’s website (www.vivendi.com). Investors and security holders may obtain a free copy of documents filed by Vivendi with the Autorité des marchés financiers at www.amf-france.org, or directly from Vivendi. Accordingly, we caution readers against relying on such forward-looking statements. These forward-looking statements are made as of the date of this press release. Vivendi disclaims any intention or obligation to provide, update or revise any forward-looking statements, whether as a result of new information, future events or otherwise.