Note: This press release contains unaudited consolidated earnings established under IFRS, which were approved by Vivendi’s Management Board on August 25, 2014.

Vivendi reports half-year 2014 earnings in line with expectations. Solid performances from Universal Music Group (UMG) and GVT resulted in a slight organic increase in the Group’s EBITA. Canal+ Group’s results benefited from its activities outside of France. 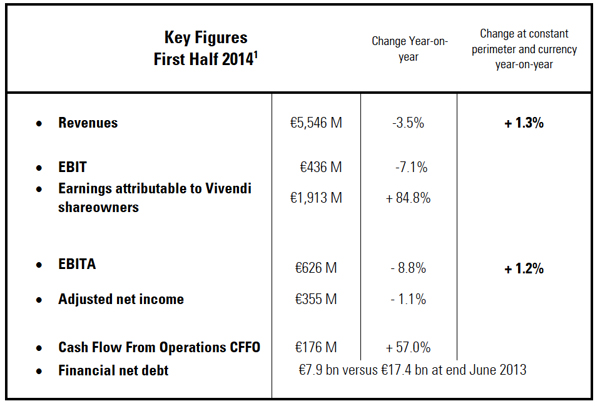 The closing of the SFR (1) sale is expected to occur in the coming months, subject to certain closing conditions, including receiving the approval of the relevant authorities. At closing, Vivendi should receive €12.9 billion in cash (after estimated price adjustments) and a 20% stake in the new SFR/Numericable entity.

Offers to acquire GVT: the Supervisory Board decided to enter into exclusive negotiations with Telefonica

Vivendi received binding offers from Telefonica (on August 4 and 28) and Telecom Italia (on August 28) to acquire GVT.

The Telecom Italia offer represents a total enterprise value of €7 billion. It includes a part in cash (€1.7 billion), a part in Telecom Italia shares (16% of share capital and 21.7% of voting rights) and a part in TIM Brasil shares (15%). The offer expires on September 20, 2014. The GVT acquisition would be submitted to Telecom Italia’s Shareholders Meeting and Telecom Italia would have an exit clause in case of a loss of significant loss value for GVT.

The Telefonica offer of August 28 represents a total enterprise value of €7.450 billion. It includes a part in cash (€4.663 billion) as well as a part in Telefonica Brasil shares (12%) of which about one third can be exchanged at Vivendi’s discretion for 5.7% of the share capital and 8.3% of the voting rights in Telecom Italia. This offer expires on August 29, 2014.

In the light of the Group’s strategy and in the best interests of its shareholders, the Supervisory Board decided to enter into exclusive negotiations with Telefonica while emphasizing the relevance and quality of the Telecom Italia offer.

The divestment from GVT would allow selling the last telecom company wholly-owned by Vivendi after the disposals of Maroc Telecom and SFR.

Telefonica’s offer is considered particularly attractive, generating a capital gain of more than €3 billion.
The other conditions of the offer, limiting to a strict minimum the risk of executing the operation as well as Vivendi’s commitments after the sale, are totally in line with Vivendi’s objectives.

The agreement between Telefonica and Vivendi would allow the development of joint projects in ​​content and media. In addition, if it so wish, Vivendi could become a shareholder in Telecom Italia by exchanging its Brazilian shares for Italian ones.

The Telefonica offer best meets the Group’s strategic and financial objectives. Vivendi begins a new phase in its development to become an integrated industrial group focused on media and content. Its objective is to pursue its development through the organic growth of its subsidiaries and a close collaboration between them, which do not preclude the group from taking minority positions in allied companies to distribute content.

The Management Board will submit the Telefonica offer to the relevant employee representatives.

[1] As a reminder, in compliance with IFRS 5, SFR (as from the first quarter of 2014) as well as Maroc Telecom group and Activision Blizzard (as from the second quarter of 2013) have been reported in Vivendi’s Consolidated Financial Statements as discontinued operations. In addition, Vivendi deconsolidated Maroc Telecom group and Activision Blizzard respectively as from May 14, 2014 and October 11, 2013, i.e. the date of their effective sale by Vivendi. Therefore neither SFR, nor Maroc Telecom group, nor Activision Blizzard were included in revenues, EBIT, EBITA, CFFO and adjusted net income. Their respective contributions to earnings attributable to Vivendi SA shareowners as well as capital gains were recorded under the line “Earnings from discontinued operations”.

[2] SFR is a discontinued operation. The completion of the SFR sale, which is subject to certain closing conditions, including receiving the approval of the relevant authorities, is expected to occur within the next months.