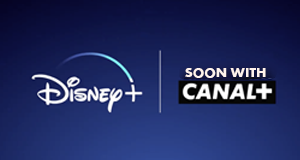 Canal+ will be the exclusive partner of the brand new Disney+ streaming service in France, which will be launched

Disney France and the Canal+ Group announced today a new a strategic distribution agreement which will provide Canal+ subscribers with access to a unique offering of films, series and documentaries from the world’s leading entertainment company.

This project fits perfectly in Canal+’s overall strategy of becoming the go-to brand for the world’s best content and service.