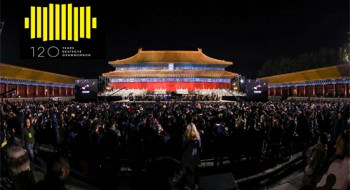 Deutsche Grammophon, the world’s oldest classical label, celebrated its 120th anniversary with a concert of great cultural and historical significance at Beijing’s Forbidden City on October 10. This is the first classical concert to be hosted there since 1998 and the most important one since the Three Tenors stood on stage together in 1994.

In front of an audience of 1,200 specially-invited Chinese and international guests, Long Yu, the first Chinese conductor to perform at the Forbidden City, led the Shanghai Symphony Orchestra in their interpretation of Carl Orff’s Carmina Burana, in partnership with the mixed adult voices of the Wiener Singakademie and the Shanghai Spring Children’s Choir. Among other works performed, the virtuoso Russian pianist, Daniil Trifonov, a leading member of DG’s younger generation of artists and part of the evening’s multinational cast of musicians, played Rachmaninov’s Second Piano Concerto.

The DG120 gala concert marked the beginning of Deutsche Grammophon’s year-long series of global events, new releases and revelatory exploration of its historic archives. It reached a vast global following via simultaneous live streams in YouTube’s 360-degree virtual reality and regular formats. Broadcasts and cinecasts are scheduled in the next few weeks and months across the globe.

DG’s anniversary concert was the first to be held at the Imperial Ancestral Temple (Taimiao) since Zubin Mehta led a production of Puccini’s Turandot there twenty years ago, an event whose worldwide significance contributed to the 2008 Olympics being awarded to Beijing.

Find more about the concert and about DG’s 120th-anniversary celebrations.