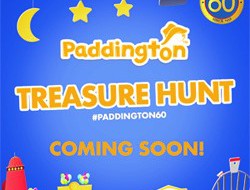 Paddington turns 60! Several Group entities have joined forces to celebrate this milestone anniversary. An interactive digital treasure hunter will take place over ten days starting October 18. Clues will be revealed online every two days, the answers to which will provide access to a site with mini games where players have a chance to win prizes.

Several Vivendi entities collaborated on the creation of this treasure hunt experience. Studiocanal, Dailymotion and Universal Music Group will release clues on their websites and support the event through media and PR. Gameloft has, for its part, produced the mini games. Digital Factory, a subsidiary of Havas, has developed the digital platform for the hunt. And, Organic, another subsidiary of Havas, will promote the event.

Many other events commemorating the creation of this little bear are scheduled, such as “Paddington in Concert” at the Royal Theater in London on October 14. Studiocanal’s first Paddington film will be screened accompanied by a live performance by an orchestra of sixty musicians.

This treasure hunt and the creation of new events and content will undoubtedly allow Paddington to have a lovely birthday.