Harlan Coben at the Olympia – a “first” for an author 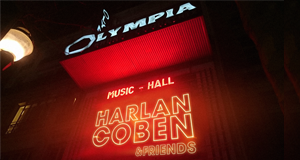 The launch of the best-selling author’s latest French-translated novel, on November 18 at the Olympia, is the result of a mobilization of several Vivendi companies.

To mark the launch of Harlan Coben’s latest novel in French translation (Ne t’enfuis plus), the publisher Belfond (Editis Group) is offering a new reading experience based on an original idea from creative agency BETC (Havas Group), that is enriched with a soundtrack created on the work of composer Hildur Guðnadóttir (Deutsche Grammophon, a Universal Music label), an artist recently in the limelight for her work on the Chernobyl series and on the film Joker.

This experience will be unveiled exclusively at the Paris Olympia (Vivendi Village) on Monday, November 18 as part of an exceptional evening with the author and the composer hosted by Laurie Cholewa (Canal+ Group).

This avant-garde show, which will put in red letters the name of an author on the pediment of the Olympia for the first time, will see Cocoon open the ball in music; extracts of the novel will then be read on stage by Stéphane Varupenne of the Comédie Française, accompanied by musical episodes; Finally, Harlan Coben and Hildur Guðnadóttir will share their sources of inspiration. This show is a new illustration showing that the Olympia, place of all emotions, multiplies the events affecting a wider and diverse audience.

The soundtrack of Ne t’enfuis plus will be available after 18 November at: www.netenfuisplus-ost.com and on the Lisez app.