MotoGP on Canal+: at the heart of the paddock 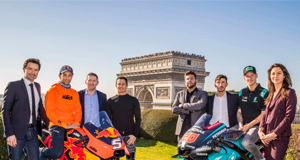 The top category of the motorcycle world championship joins the Canal+ Group’s motorsport family. Start of the competition on March 10 with the Qatar Grand Prix.

With the MotoGPTM, Canal+ confirms the wealth of its offer in motorsport. The Group is already broadcasting the Formula 1 World Championship, Formula 2 and Formula 3, as well as the Indy Car, Formula E and the French Rally Championship. The World Rally Championship (WRC) recently completed this offer. Never a motor sports offer had been so dense and qualitative.

Canal+ sets up an editorial team entirely dedicated to the discipline, a team composed of enthusiasts, experts, and consultants who have driven at the highest level, and who will be in action on the circuits of the first practice session of the Moto3 category from Friday morning to the MotoGPTM podium to Sunday afternoon.

Through reports and an innovative image processing, the spectacular sequences offered by this championship will be analyzed and peeled, thanks to:

– A total of 156 cameras dedicated to the race, including 120 onboard cameras for capturing on pilots and motorcycles, and a very high quality realization with high speed cameras, large angles or helicopters,

– An expert mode on myCanal, with the multicam to follow the Grand Prix from the angle of one’s choice, and have the statistics live.

MotoGPTM, Moto2 and Moto3 will be broadcast 100% on the French Canal+ channels and services, races and qualifications. All direct and trays will be realized on site, for a rendering in total immersion in the competition.

Two MotoGPTM Grand Prix, including the Grand Prix de France, will be broadcast in clear and live.

Infosport+ and CNews will discuss the latest Grand Prix news with images, interviews and analysis every weekend.

All competitions will be available live or replay on myCanal.