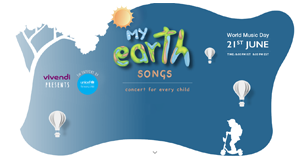 Vivendi is partnering with Grammy Award winning composer and music producer and UNICEF India celebrity supporter, Ricky Kej, for a special concert on World Music Day with songs composed for children that focus on raising awareness on environment issues.

The concert, in support of UNICEF’s work for children around the world, will be live streamed and broadcast online globally on June 21. An ensemble cast of six Grammy Award winning and two Grammy Nominee musicians from around the world that create music for children will perform songs composed for children that focus on raising awareness on environment protection and sustainability.

Vivendi supports Ricky Kej on this collection of songs for children-everywhere. His commitment to spreading kindness and goodwill to better the planet is totally in line with what Vivendi is already doing with Paddington Bear and UNICEF.

The concert, with also gets enthusiastic support from Havas India, features select songs from the ‘My Earth Songs’ album, written by Ricky Kej and launched jointly by Ricky Kej and UNICEF in 2018. The album with 27 songs for children and young people highlights the situation of the planet and the actions we the citizens of the planet need to take to ensure a clean, green and prosperous world for future generations. They focus on the Sustainable Development Goals and are a great learning tool for all children and adults.

> More about the concert, and details on streaming and broadcast times, in this press release and on www.myearthsongs.com.