The Beatles: Abbey Road reissued for its 50th anniversary 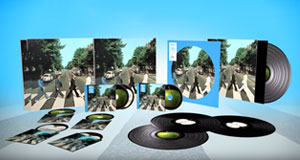 The mythical album comes out in a new collector reissue including several new titles.

After the success of Sgt. Pepper’s Lonely Hearts Club Band’ and The White album’s reissues, here is the much-awaited Abbey Road one for his fiftieth anniversary. Indeed, it was on September 26, 1969 that this iconic record came out, as famous for its cover as for its exceptional content.

The eleventh studio album – which could have been known as Everest – unites the Fab Four for the last time, under the direction of producer George Martin (the fifth “Beatles”). Nobody knew it then, but when the album came out in Britain and moved to the top of the charts, the Beatles had actually already separated.

For its 50th anniversary, Abbey Road benefits from a ‘Super Deluxe Edition’ treatment. A 2019 version carried by a new mix signed Giles Martin (George Martin’s son), with the mix engineer Sam Okell, still in the mythical studio. The album is available for the first time in 5.1 mixes in Dolby Surround and Dolby Atmos. The 17 tracks of the original album are accompanied for the first time by 23 unreleased tracks from different recording sessions.

Abbey Road is the best-selling Beatles album, with more than 30 million copies sold. He remained #1 for 17 weeks, and his 2019 reissue will surely also make the top of the charts.