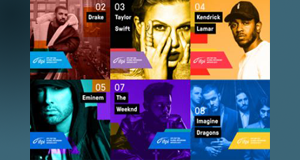 IFPI, the organisation that represents the recorded music industry worldwide, has revealed its Top 10 Global Recording Artists of 2017, with Universal Music Group artists making up six out of the Top 10, including four artists in the top five.

Drake, recipient of the award in 2016, takes second place after a successful year which saw his More Life mix tape break records for the most streams in 24 hours for an album on Apple Music and best first-day streams for an album on Spotify.

Taylor Swift‘s sixth studio album, Reputation, which was released in November 2017, has helped the artist take third place. Reputation debuted at No.1 on the Billboard 200 chart and has since topped the charts in Australia, Austria, Belgium, Canada, Ireland, the Netherlands, New Zealand, Norway, Switzerland, the UK and US.

Other UMG artists featured include Kendrick Lamar at 4, Eminem at 5, The Weeknd at 7 and Imagine Dragons at 8.

The IFPI Global Recording Artists chart was the first, and remains the only, ranking to accurately capture the engagement with artists across audio streaming channels, alongside digital and physical album and singles sales on a global basis.