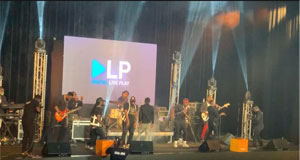 In this challenging period of confinement, the label creates an innovative and engaging way for fans to enjoy live music

The power of creativity is once again demonstrated with the original project called Digital Live Play. Universal Music Africa (UMA) took up the challenge of entertaining their African audience in a period where the movement of individuals is severely limited.

Despite the uncertain and unprecedented conditions, the UMA teams were able to organize a live concert in less than 48 hours in a city under strict precautionary measures without exposing people to any safety risk. Their idea was a simple but brilliant one: A full house in an empty room!

The Digital Play Live concept involves the organization of about eight concerts given by nine artists in a venue, always without the presence of an audience, in Abidjan, Ivory Coast. Artists invited to participate in this innovative project were quite excited by the idea.  They welcomed the opportunity to pass on prevention messages to their audiences, thereby actively participating in the continent’s efforts to limit the spread of the coronavirus.

The aim is to replicate the Digital Live Play initiative in several other countries in Southern Africa, particularly in Benin and Cameroon, where the CanalOlympia venues are already  gearing up to host this new genre of live concerts.

The concert can be watched on the Orange TV channel and Universal Music Africa’s Dailymotion page.