Note: This press release contains non audited consolidated earnings established under IFRS, which were approved by Vivendi’s Management Board on May 5, 2015, and reviewed by the Audit Committee on May 6, 2015, and by the Supervisory Board on May 12, 2015.

Vivendi: Operating results increase for the first quarter of 2015 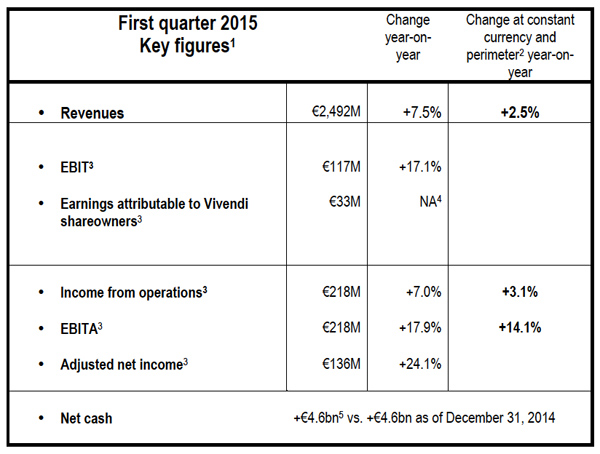 –       their contribution until the effective divestiture, if any, to each line of Vivendi’s Consolidated Statement of Earnings (before non-controlling interests) has been reported on the line “Earnings from discontinued operations”;

–         their share of net income has been excluded from Vivendi’s adjusted net income.

[2]Constant perimeter reflects the following changes made in the consolidation scope: acquisitions of Mediaserv (on February 13, 2014) and Thema (on October 28, 2014) at Canal+ Group.

[3] For the reconciliation of EBIT to EBITA and to income from operations, as well as of earnings attributable to Vivendi SA shareowners to adjusted net income, see
Appendix V

[4] Not comparable due to the sale of Maroc Telecom and SFR in 2014 (qualified as discontinued operations in 2014 as per IFRS 5).

[5] Excluding the partial redemption by GVT of its loan for €0.3bn, as per IFRS5.