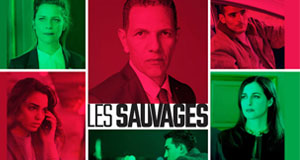 Adapted from the eponymous novel by Sabri Louatah, Canal+’s new Original creation by Rebecca Zlotowski’s (Belle Epine, Grand Central, Une fille facile), co-signed by the novelist, is making a splash. Served by a high-flying cast, Savages is a thrilling political and family thriller that has garnered praise at La Rochelle festival and Toronto.

The story begins on the evening of the French presidential election, with the assassination attempt on newly elected President Idder Chaouch. Fouad Nerrouche, both TV star and boyfriend of Jasmine, the daughter of the president, is quickly suspected by the French domestic intelligence: his own brother could be the author of the attack. Pushed by the head of the presidential security, Fouad decides to investigate his own family, in the heart of the deprived neighborhoods of Saint-Etienne. In 6 x 52 minutes, this addictive dystopia is a “great French novel of 2019”, a family saga skillfully mingled with the mysteries of power.

Savages is the first Original Creation of Canal+’s season. Eleven more will be airing this season in France, including The New Pope, with Jude Law and John Malkovich, season 5 of The Bureau, and also an adaptation of The War of the Worlds, ZeroZero Zero, the latest creation of Roberto Salviano,…

The series and Original Creations constitute a rich offer that Canal + wishes to continually expand. This is why Canal+ Group and Netflix announced on September 16th a partnership under which the Netflix service will be included in Canal+ bundles. Starting on October 15, Canal+ subscribers to the CINE / SERIES package will have access to the Canal+ premium channel as well as the Netflix service, all under one subscription.