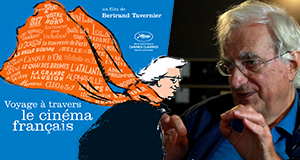 For the release of “Voyage à travers le cinéma français”, Culture(s) with Vivendi interviewed  director Bertrand Tavernier who unveils all the richness of French cinema in his documentary.

Bertrand Tavernier is madly in love and shares it with us !

With “Voyage à travers le cinéma français” released on October 12, 2016 with the participation of Canal+ and Ciné+, the Oscar and Cesar winner and prolific filmmaker immerses us into the major French movies  from 1930 to 1970. He pays a wonderful tribute to actors, film editors and conductors.. who participated in the richness of our cinematographic heritage.

Directors such as Jean Renoir, Jacques Becker or Marcel Carné ( whose movies are part of Studiocanal films catalogue) are mentioned along with film music composers like Georges Delerue, Maurice Jaubert, Joseph Kosma and Jean Wiener – all featured on the music album accompanying the movie (Decca Records, Universal Music France).